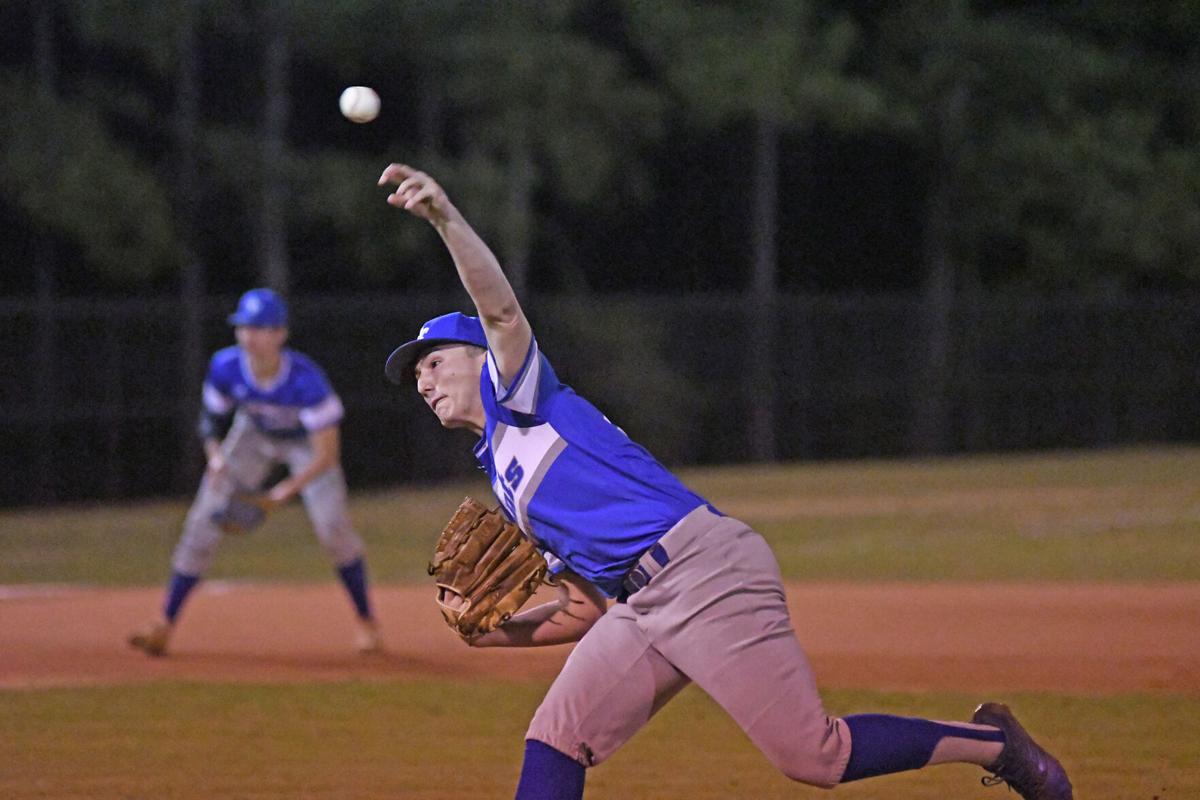 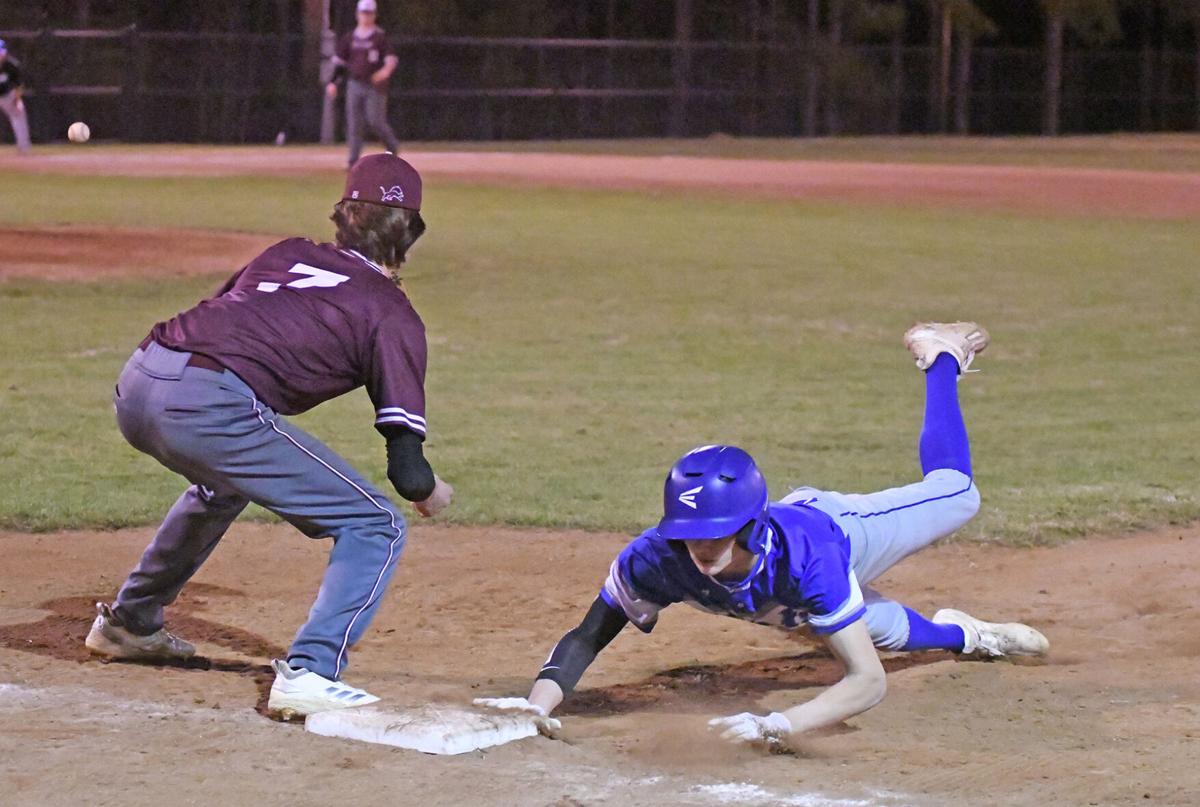 Sylva-Bay freshman Hayden Bowen dives back to first base during a Raleigh pickoff attempt. 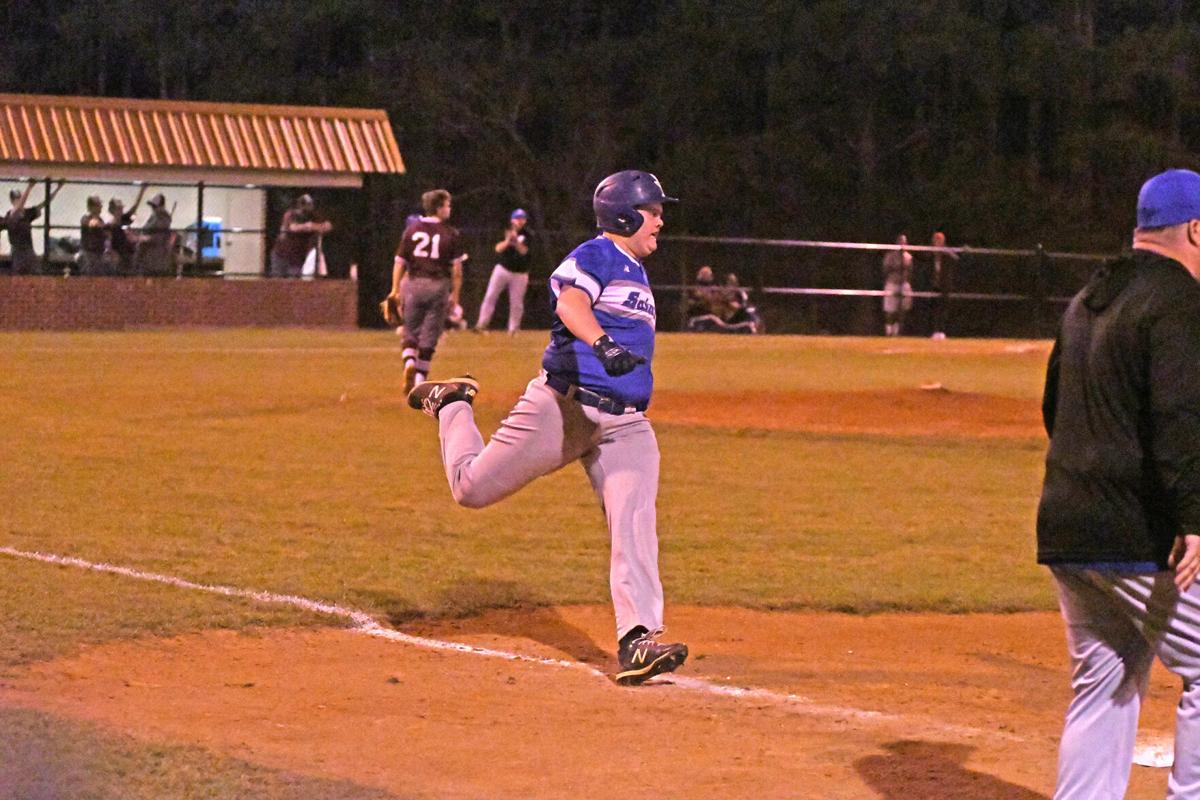 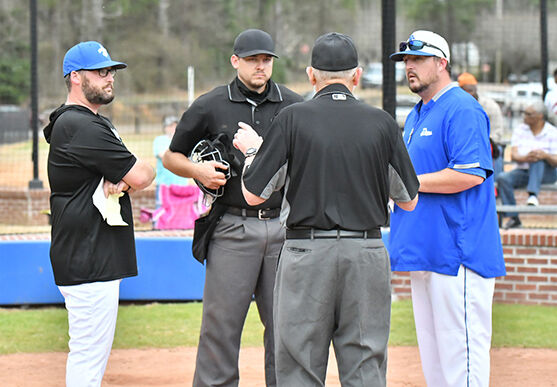 Sylva-Bay head coach Tanner Ford (left) and Bay Springs head coach Destin Ellis (right) meet at the plate Saturday afternoon prior to the first ever meeting on the diamond between the Saints and Bulldogs. 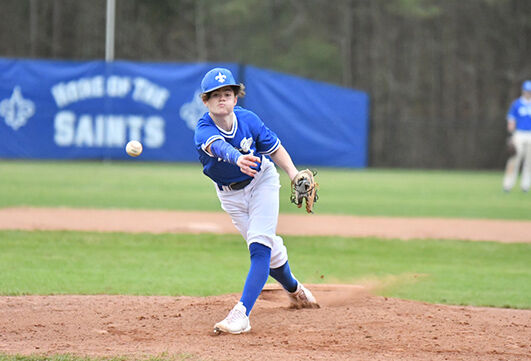 Sylva-Bay freshman Hayden Bowen dives back to first base during a Raleigh pickoff attempt.

Sylva-Bay head coach Tanner Ford (left) and Bay Springs head coach Destin Ellis (right) meet at the plate Saturday afternoon prior to the first ever meeting on the diamond between the Saints and Bulldogs.

After suffering a loss to Puckett last Thursday in its opening game of the SBA Classic, Sylva-Bay made a fine comeback collecting two wins during the three-day high school baseball exhibition that featured a number of teams. The Saints edged Raleigh in an exciting come-from-behind victory Friday night and topped Bay Springs Saturday afternoon in the two teams’ first ever meeting.

Trailing Raleigh 2-1, with one out, in the final at-bat Friday night, Sylva-Bay’s Eli Blackwell reached first on an error. The Saints’ offense was near stagnant before that, but took off when it mattered most. Sophomore Aiden Harper laid down a first base reaching bunt to place runners at first and second, and Denver Westbrook laced a drive to right field to score Blackwell and knot the game 2-2. Later, still with one out and with runners on first and third, August Jones put a ball into play that scored Harper, and the Saints celebrated a 3-2 victory, its first of the young season.

An unexpected bunt with a runner on first and with one out was the game-defining play.

“They (Raleigh) brought in a new third baseman, and he had been playing outfield the whole game. Once I saw that, he was playing a little deeper,” explained first year SBA head coach Tanner Ford. “We had probably our best bunter on the team up in Aiden Harper, and he got the job done. That’s what I praised them (the team) on throughout. All the hits and all the strike-outs, that may have been the biggest part of the game right there, and they all stayed in the game until the end.”

Ford was extremely proud of his young squad, the way they battled through the contest, and the way they came on strong offensively in the end.

“You know, usually in baseball the offense is the last thing to really get going like it should be. But, with that being said, there towards the end we got hits when we needed to hit it. We put the ball in play just enough to get three runs,” he mentioned with a humble smile on his face. “I am proud of the younger guys stepping up. The eight and nine hole led off the game with the hits. They were the first two hits of the ballgame, and you can’t get much better than that.”

Freshman Hayden Bowen singled for Sylva-Bay in the second inning to bag the team’s first hit, and Saints youngster Case Thurston followed with a line shot to center field to plate Bowen and hand the Saints a 1-0 lead in the bottom of the second. Raleigh tied the contest on a two-out, fielding error in the top of the third and went ahead in the fourth, 2-1, on a two-out, bases-loaded walk. But, Saints pitcher Eli Blackwell eventually gutted out the three bag situation before the exciting offensive finish.

Not to take away from the hefty offensive ending, but Blackwell was the dot on the exclamation Friday night against the Lions. The senior Saints hurler worked out of several jams during the game and fanned 12 Raleigh batsmen at the plate.

“This is a guy on his first outing, and he hasn’t picked up a baseball in a game since quarantine started back in March of last year. With him coming out and being able to throw as many pitches as he did, that was big,” Ford said of Blackwell. “He just showed that senior leadership and what it does when it counts.”

Ford is looking forward to the season with his young Saints team, but mentioned that squad revolves around two senior leaders.

“We are very young. There is no doubt who leads this team, and that is my two seniors, Eli Blackwell and Denver Westbrook,” he said.

Saturday afternoon, Sylva-Bay picked up its second diamond win of the season in an 8-2 decision over Bay Springs at the SBA Classic. Harper earned the victory on the hump in the first ever meeting between the two schools that are only separated by three miles.

MEDIA DAY: What to expect from Southern Miss baseball in 2021