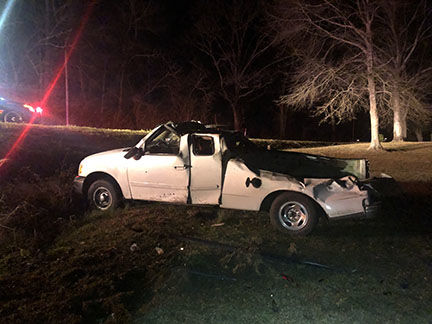 This truck rolled over on Springhill Road. Photo/Dana Bumgardner

One of the campers burned on Summerland Road. Photo/Steven Crawford 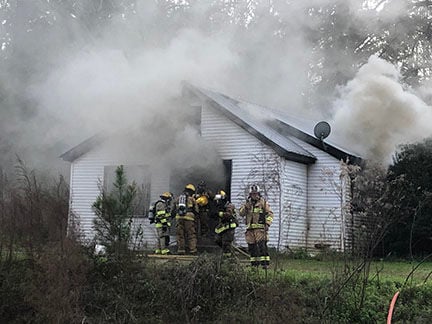 This truck rolled over on Springhill Road. Photo/Dana Bumgardner

One of the campers burned on Summerland Road. Photo/Steven Crawford

Jones County – Friday evening into Saturday morning proved to be a busy time for the Jones County fire service. Two structure fires were reported and responded to and are listed below, along with a rollover MVC.

4:30 p.m. – M & M, Glade and Powers volunteer fire departments responded to 35 Masonite Lake Road to the report of a structure fire in the Myrick community. Homeowner Dennis Stroud stated he was raking leaves and pine straw in the yard and began burning it near the south side of the single story wood home with a raised foundation. He reported the fire “blazed up” and spread under the home. He and his wife evacuated the home and activated 911.

Upon arrival of the first responding fire apparatus, smoke was visible from the gables of the home and through the front door. After an aggressive interior attack, firefighters were able to save a large portion of the residence. No injuries were reported.

11:03 p.m. – Hebron, Calhoun and Soso volunteer fire departments responded to the report of two camper trailers on fire at 492 Summerland Road, Soso. Lovell Young, who resided in one of the campers, stated he found the campers on fire when he returned home. Young’s sister, Florine Young, resided in the second camper, which was parked next to his. No one was home at the time the fires started. The campers were devastated in the incident.

Jones County Sheriff’s Office was also on scene. This was the second time these volunteer fire departments have responded to this address. The first time was in 2017, when the brick home located there burned.

2:27 a.m. – Before Calhoun Volunteer Fire Department was able to return back to their station after the camper fires, the received the report of a one vehicle wreck at Springhill Road and Service Road in Laurel. Upon arrival of the initial fire apparatus, firefighters found an extended cab Ford F150 down a small embankment at the intersection. The Ford had rolled and taken out one of the stop signs and road signs at the intersection during the incident. Two unrestrained adult occupants were in the vehicle at the time, with one sustaining minor injuries and one sustaining moderate injuries.

Jones County Sheriff’s Office was also on scene. Emserv Ambulance Service transported one person to the hospital for treatment. No other injuries were reported.

Saturday munch on the snack that gives back...to your heart. It's National Almond Day!