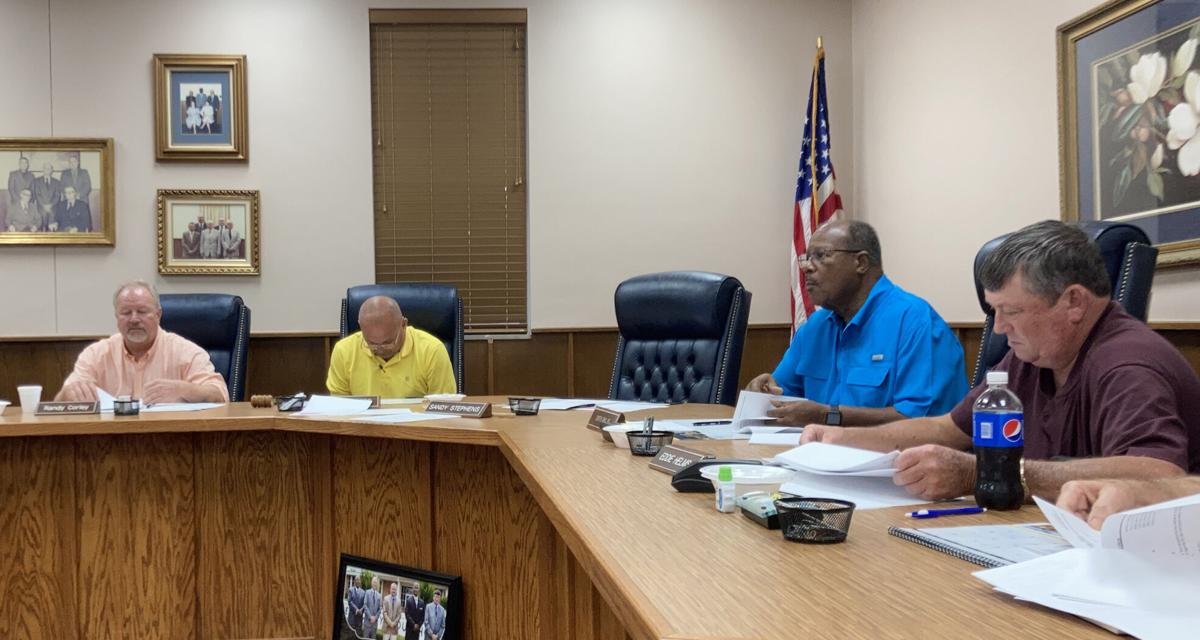 Jasper County Board of Supervisors members (from left) Randy Corley of Beat 4, Doug Rogers (Board President) of Beat 3, Curtis Gray, Sr. of Beat 5, and Eddie Helms of Beat 1 discuss the county’s ambulance service with a CareMed EMS representative, Brian Sanderson, Monday morning during a meeting at the Jasper County Courthouse in Bay Springs. Beat 2 Supervisor Sandy Stephens was unable to attend the meeting due to a medical issue. 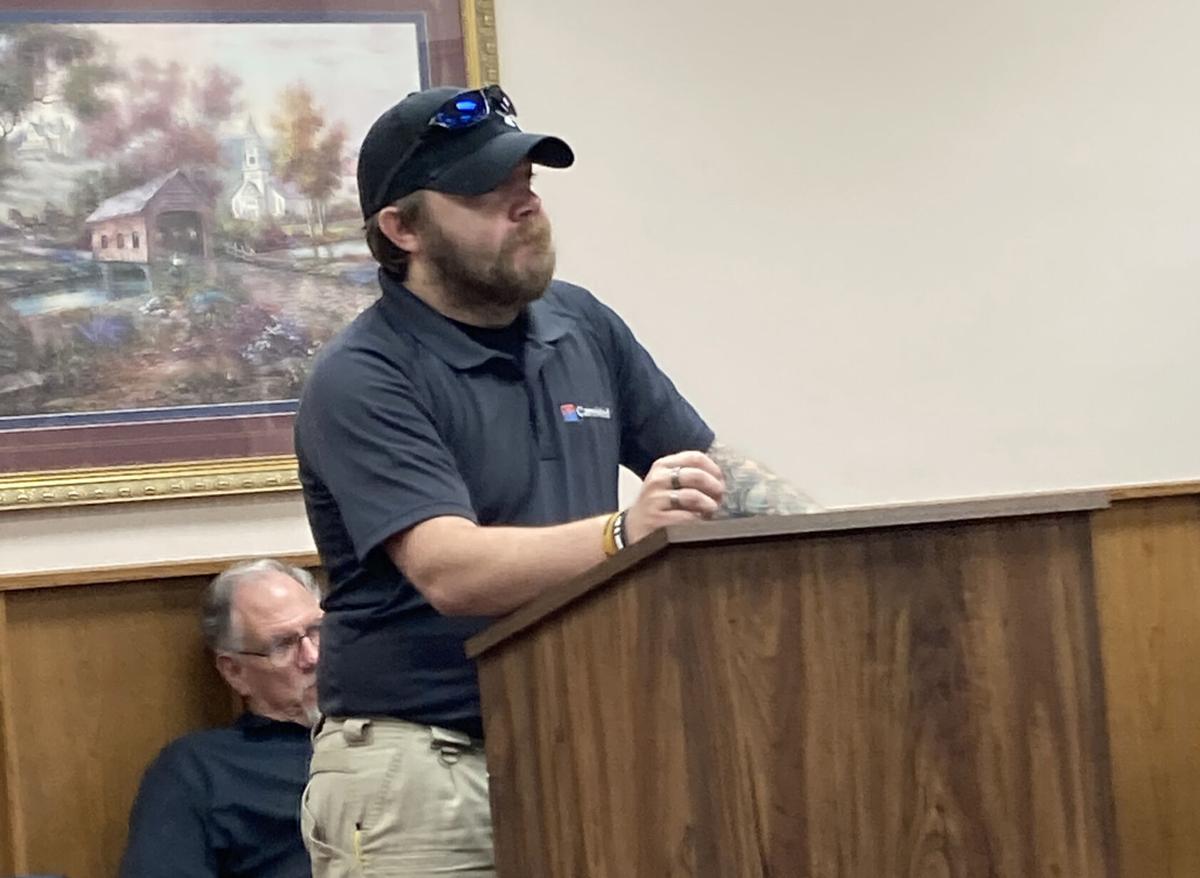 Area CareMed EMS manager Brian Sanderson listens to concerns from the Jasper County Board of Supervisors Monday morning. It was learned Monday morning Sanderson had recently come on with the county’s ambulance provider, CareMed, as a manager in the area, and he respectfully heard the Supervisors’ concerns about issues.

Jasper County Board of Supervisors members (from left) Randy Corley of Beat 4, Doug Rogers (Board President) of Beat 3, Curtis Gray, Sr. of Beat 5, and Eddie Helms of Beat 1 discuss the county’s ambulance service with a CareMed EMS representative, Brian Sanderson, Monday morning during a meeting at the Jasper County Courthouse in Bay Springs. Beat 2 Supervisor Sandy Stephens was unable to attend the meeting due to a medical issue.

Area CareMed EMS manager Brian Sanderson listens to concerns from the Jasper County Board of Supervisors Monday morning. It was learned Monday morning Sanderson had recently come on with the county’s ambulance provider, CareMed, as a manager in the area, and he respectfully heard the Supervisors’ concerns about issues.

Jasper County seems to be having an ongoing problem with its relatively new contracted ambulance service that is not going to be overlooked. Board of Supervisors President Doug Rogers of Beat 3 made clear Monday morning during a meeting with an area CareMed Emergency Medical Services manager changes have to be made, or the Board will have to consider looking elsewhere for an ambulance service.

“If we can get ‘communication’ down, we may can go forward. If we continue to go at the rate we are going, there will be no forward,” Rogers stressed to area CareMed EMS manager Brian Sanderson, who recently came on with the company as a manager in the area some weeks ago, according to conversations during the meeting.

Rogers also mentioned to Sanderson during the gathering he was expecting to meet with CareMed EMS COO Stan Alford Monday morning, whom the Board worked with closely throughout previous contract presentations and the service bid process that began late last year. Alford was not available for the meeting Monday morning.

CareMed EMS took over ambulance services in the county at the beginning of March 2021 through a prior bid and contract process with the county that was somewhat out-of-the-ordinary with two bid processes. The Board of Supervisors on December 22, 2020, a day following receiving three bids for the service in a second round bid proposal, approved CareMed EMS as the county’s ambulance service provider. The Board on December 21, 2020, opened county ambulance service bids for a second time after coming to a unanimous agreement on a lone service provider bid proposal (CareMed) in mid-October. Later, in mid-November, the Board rescinded that decision in a 3-to-2 vote following a review of the company’s finalized contract that did not meet the overall Board’s approval specifications, which eventually led to the second bid process.

CareMed EMS, in the second round of bidding, eventually took the contract with a $105,000 annual bid for the service. Three ambulance service providers - CareMed, ASAP (former provider), and Patient Care - presented bid proposals to the Board of Supervisors during the second round of bidding. CareMed originally bid, in the lone bid, $125,000 annually in October, which would have reflected an estimated $33,000 to $35,000 savings per year to the county for an ambulance service as opposed to the county’s former service, ASAP. With its second and much lower bid in December, CareMed presented an approximate $55,000 annual savings to the county for an ambulance service. ASAP entered a $143,500 bid during the second round bidding, and Patient Care bid $164,000 with an elevated scale per year.

The transition of CareMed EMS into the county since March 2021 has not been smooth, and multiple and continuous complaints have been presented by residents to Rogers and other Board members.

Only weeks after CareMed landed boots on the ground in the county on March 1 at midnight, according to Rogers, there were problems, including the company lacking qualified personnel (paramedics) on the ambulances stationed in the county for the ambulances to be able to transport patients from a scene to medical facilities and call times. Some of those problems have been solved, Rogers said, but Monday morning, he added that various other complaints from his constituents and other residents of the county about the ambulance service have continued to compile weekly. He mentioned most of the complaints revolve around “professionalism with the public and communication,” and that he has personally noticed such instances by inserting himself into inconspicuous observance.

Rogers went on to explain to Sanderson Monday morning his major present concerns, which are critical, about the issues with the ambulance company are an overall concern of his for the well-being of the citizens of Jasper County.

“We are getting pounded with complaints, and when I say ‘complaints’ it is seven, to eight, to ten complaints a week. It is anything from employees and they way they handle themselves to call times. I will tell you we are concerned,” Rogers explained to Sanderson, while also noting he was speaking on behalf of the Board. “It has got to get better. When I say ‘it has got to get better,’ it has got to get better. We are going to put a time frame on it. We kept saying it was going to get better, and it didn’t get better. I realize you are new and coming in here, and we really wanted to talk to Stan (Alford). I wanted him here today, but that didn’t work out. I will tell you we have to answer to the constituents of this county, and we have heard complaint after complaint, and we are looking for results. If we don’t get those results, then we are going to have to do something. I understand, and I really don’t want to bring another county into it, but there are problems in other counties, too. We definitely want to address it with monitoring, and I mean heavy monitoring. I’m on it. We need to get this problem solved. We need to push forward, and let’s get better together. If we don’t get better together, then we are going to have to part. The complaints are getting to the extreme.”

Sanderson explained to the Board new ideas are coming into place and the company has new personnel coming on to help with some of the problems Rogers mentioned.

Sanderson continued to listen to Rogers with a seemingly sympathetic and concerned ear about the situation the company has been presented and asked more questions about what the complaints involve to better help serve the county.

Rogers mentioned “the handling of themselves” (certain employees) when they arrive on a scene had a lot to do with the complaints he has been hearing that vary around the county, but he did not go into great detail during the open meeting. He also stressed the dire importance of the need for fully staffed ambulances in the county.

Sanderson reassured Rogers Monday morning both ambulances located in the county are now fully staffed with appropriate medical personnel and the company will work towards a positive goal with the county.

Board Attorney Rickey Ruffin also mentioned to Sanderson he had received a number of recent phone calls concerning the ambulance service.

“I’m the Board Attorney, and I’m getting the calls, too - probably not near as many as Doug (Rogers) - about our contract,” he mentioned. “Some of my calls deal with incompetency … That doesn’t work good when you are in the public. I guess the bottom line is I don’t know how much of it is true and how much of it is not true, but the bottom line is, if they are complaining, there is something going on out there. The problem has got to be solved.”