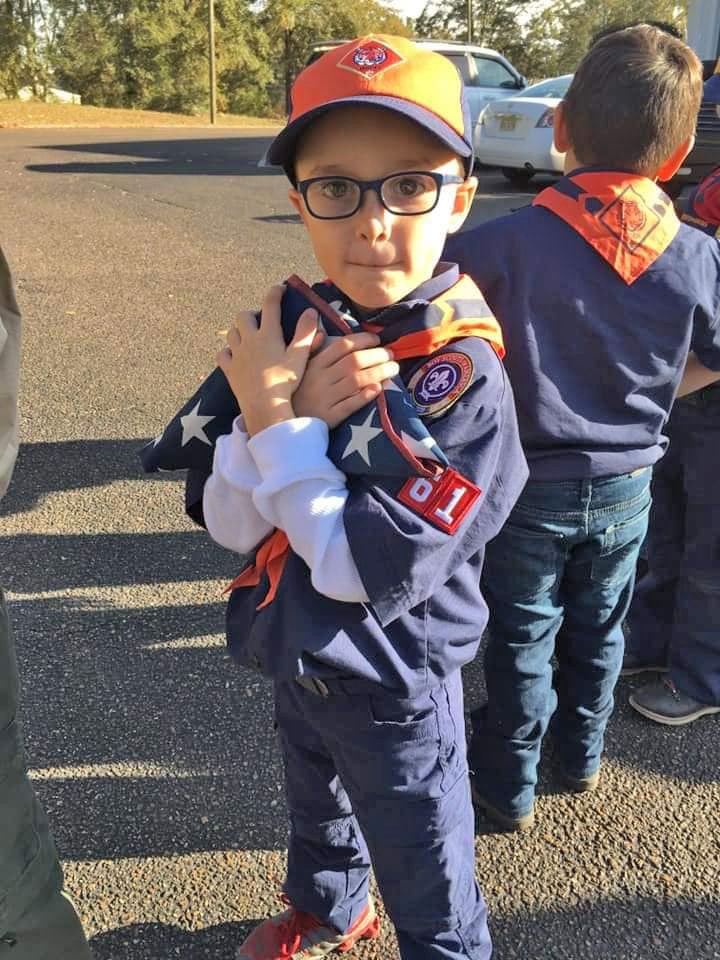 Dillion Sawdy, from Tiger Cub Pack 61 of Raleigh, clutches a properly folded flag as he waits to take part in an official flag retirement ceremony with The American Legion.

On Sunday November 17, American Legion post 71 and local Scouts joined forces to remember veterans by retiring over 40 United States of America flags. Under the guidance of Eagle Scout Miles Guthrie and Troop 446, the younger Cubs and their leaders/parents learned the proper way of retiring the American flag. For some it was the first time doing so.

The United States Flag Code states: “The flag, when it is in such condition that it is no longer a fitting emblem of display, should be destroyed in a dignified way, preferably by burning.”

Prior to the retirement ceremony, each flag was unfurled one last time then folded with 13 folds, each carrying a significant meaning. Pack 61 Cubs held a special meeting to fold 39 of the 40 flags while learning the meaning.

The significant meaning of each fold is: The first fold symbolizes life; the second symbolizes our belief in eternal life; the third is made to honor and pay tribute to the veteran departing our ranks, and who gave a portion of his or her life for the defense of our country to attain peace; and the fourth fold exemplifies our weaker nature as citizens trusting in God. It is to Him we turn for His divine guidance.

The fifth fold is an acknowledgment of our country, for in the words of Stephen Decatur, "Our country, in dealing with other countries, may she always be right, but it is still our country, right or wrong." The sixth fold is for where our hearts lie. It is with our heart that we pledge allegiance to the flag of the United States of America, and to the republic for which it stands, one nation under God, indivisible, with liberty and justice for all.

The seventh is a tribute to the one who entered into the valley of the shadow of death, that we might see the light of day, and to honor our mother, for whom it flies on Mother's Day. The ninth fold is an honor to womanhood, for it has been through their faith, love, loyalty, and devotion that the character of the men and women who made this country great have been molded.

The tenth fold is a tribute to father, for he, too, has given his sons and daughters for the defense of our country since he or she was first-born. The eleventh fold, in the eyes of Hebrew citizens, represents the lower portion of the Seal of King David and King Solomon and glorifies the God of Abraham, Isaac, and Jacob. And the twelfth fold, in the eyes of a Christian citizen, represents an emblem of eternity and glorifies God the Father, the Son, and Holy Ghost. And the last fold, when the flag is completely folded and the stars are uppermost, reminds us of our national motto: "In God We Trust."

The Courthouse Flag was not unfurled, saving it for the retirement ceremony, along with Troop 446 flags from Seminary.

On the day of the ceremony, Patt Ellis, Master of Ceremonies, opened with prayer and a description of Old Glory as Pack 61 Cubs were holding small American flags. After opening, Ellis explained other ways of preparing flags for proper retirement. One of which Troop 446 had prepared prior to ceremony.

"The flag is divided by colors, separating the red and white stripes and the Union (Blue with stars). Red represents strength and valor, white is for purity and innocence, blue is for vigilance, perseverance and justice." Ellis explained.

Then by each color the Scouts, one by one, carried the strips to the fire urns with dignity and respect as the members of Post 71 and guests stood at full attention until the very last color was retired.

Awaiting were the 40 plus flags to be retired, but before doing so there was one flag that was not pre-folded by Pack 61, the Bay Springs Courthouse United States of America Flag. And it was a beautifully big flag! Before retiring this special flag, it was presented at full display one last time. This allowed the younger Cubs to understand the complete retirement ceremony, with a final Pledge of Allegiance.

Together all Scouts present, Cub Scouts and Boy Scouts, honorably folded this flag one last time. After each pre-folded flag was retired, the last was the Bay Springs Courthouse flag, each scout present carried the pre-folded flags to one of the three urns, placing the flags in the fire, standing with a final salute before leaving. The ashes of the retired flags were scattered around the Veterans Memorial to honor Veterans.

Troop 446 of Seminary and Pack 61 of Raleigh would like to thank Post 71 Commander, Pat Baughman, and the American Legion for the great honor of retiring the United States of America Flags. And to thank all Veterans far and near for their service and sacrifices for American freedom.